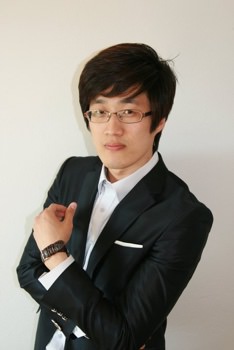 Tenor Moon Yung Oh was born in Seoul, Korea in 1980. His first musical experiences were with the Korea Academy Children’s Choir from 1990 until 1996. He studied singing at the Seoul Theological University, finishing in 2006. He continued his vocal studies in Germany with Professor Frieder Lang at the Munich College of Music and Drama, where he received his degree in 2010.
He has performed as a Tenor Soloist in many concert works including Handel’s Messiah, J.S. Bach’s Christmas Oratorio and St. Mathew Passion, as well as Mendelssohn’s oratorios Paulus and Elias and his Symphony No.2 Lobegesang.
On the operatic stage he has sung the role of Paulino in Domenico Cimarosa’s Il matrimonio segreto, the role of Ferrando in Mozart’s Così fan tutte as well as appearing in Purcell’s Opera The Fairy Queen.
In 2011 he was a finalist in the Hugo Wolf Song Competition in Stuttgart and won the Mozart Prize in the Grandi Voci 4th International Opera Singers Competition in Salzburg. He has been a permanent member of the Bavarian Radio Choir since 2011.