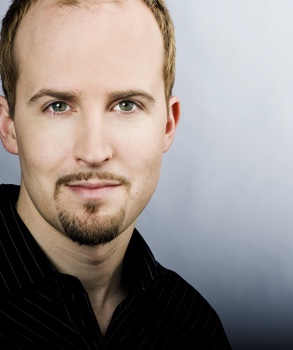 A native of Wilmington, Delaware, USA, Andrew Lepri Meyer has appeared on the operatic and concert stage in the United States and Europe. His first major performance was singing the role of Dr. Cajus in a production of Verdi’s Falstaff at the Tanglewood Music Center under the direction of Seiji Ozawa. He received his Master of Music in 2002 from the University of Southern California. Munich has been his home since 2004.
Andrew Lepri Meyer originally specialized in the works of J. S. Bach. He took part in the opening season of the Walt Disney Concert Hall in Los Angeles as the Evangelist and Tenor soloist in Bach’s Christmas Oratorio along with the Los Angeles Master Chorale conducted by Grant Gershon.
His operatic highlights include many of the Operas by Donizetti. He has sung the roles of Nemorino in L’elisir d’amore as well as Ernesto in Don Pasquale. He performed in the Golden Hall of the Vienna Musikverein as Hervey in Anna Bolena, sharing the stage with Edita Gruberova. He also performed with Diana Damrau and Josepf Calleja as Normanno in a production of Lucia di Lammermoor which was recently released by Erato.
He has been a permanent member of the Bavarian Radio Choir since 2006. This has given him the opportunity to work as a soloist with major conductors including Nicolas Harnoncourt, Ricardo Muti and Mariss Jansons. He can be heard on many recordings of the Bavarian Radio’s Choir, Radio Orchestra as well as its Symphony Orchestra.