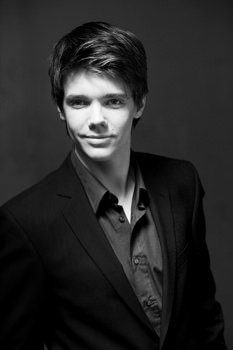 The Munich native received his earliest musical training as an Alto Soloist with the Bad Tölz Boys’ Choir. In preparation for his Vocal studies, which he began in 2005 at the Munich College of Music and Drama with Professor Frieder Lang, he enrolled at the Bavarian Singing Academy in the Voice class of Hartmut Elbert. He took song interpretation classes with Professor Helmuth Deutsch, Fritz Schwinghammer, Professor Siegfried Mauser and Professor Celine Dustily. He attained his Masters under the guidance of chamber singer, Professor Andreas Schmidt, during which time he also took part in Master Classes with Matthias Goerne and Christian Gerhaher. He also participated in many productions with the Bavarian Theater Academy August Everding, where he often worked with Ulf Schirmer and the Munich Radio Orchestra including singing the role of Andrej in Peter Eötvös’ Tri Sestri, which he also performed at the State Opera’s Schillertheater in Berlin. He received stipends from the Hans and Eugenia Jütting Foundation, the German Stage Guild and the LiveMusicNow. He won awards in the National Singing Competition Berlin, The Song Competition of the Kulturkreis Gasteig, and the German Music Colleges’ Mendelssohn Competition. He was also a guest at the Bach Academy Stuttgart with Hans-Jörg Albrecht and at the Beethoven Festival in Bonn where he presented a recital with Pianist Eric Schneider.